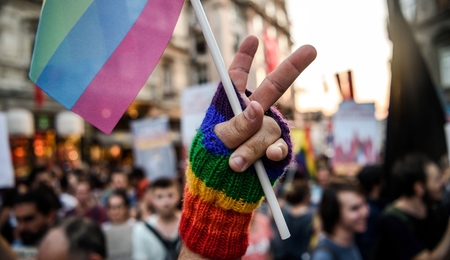 A recent court decision had ended the blanket ban on LGBTQ events in Ankara, clearing the way for the annual Pride Parade at Middle East Technical University (METU) to move forward on May 10. However, on May 6, just days before the event, the school’s rector emailed the student group organizing the event and informed them that the parade would not be allowed to take place.

Despite the province-wide ban on LGBTQ events, the METU Pride celebrations went forward last year without incident after international pressure.

In response to the rector’s decision, Fotis Filippou, Amnesty International’s Campaigns Director for Europe issued a statement condemning the ban and urging the rector to reconsider.

For the last eight years students at this university have marched through their campus to celebrate pride and demand equality and dignity for LGBTI people. It is celebration of love which sends a message of hope to all those struggling to uphold fundamental rights in Turkey and beyond.

Rather than banning Pride events, the university should be supporting and protecting such marches and challenging homophobia and transphobia. Students must be allowed to march without fear of intimidation or violence.

The Rectorate needs to reverse its decision and students must be allowed to march without fear of intimidation or violence.

Show your support for the METU students and tell the rector to allow the Pride celebrations here.