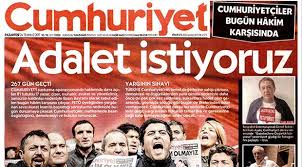 After hearings this week, journalists from the newspaper, Cumhuriyet, remain in pretrial detention.  The case underlines the extents to which Turkish authorities have used the courts to pursue perceived political enemies and crackdown on freedom of expression.  The journalists have languished in pretrial detention now for many months.  Convicted of no crime, they will remain there.

Speaking in October, 2016, Amnesty’s John Dalhuinsen said of the case:

The detention of journalists and staff from Turkey’s only remaining mainstream opposition newspaper is part of an ongoing systematic attempt to silence all critical voices. Together with the shutting down of media houses over the weekend, this is the latest wave in a post-coup purge which has turned Turkey’s once vibrant media landscape into a wasteland.

After the hearings in July, Dalhuisen noted that “the hearing so far has made it glaringly apparent that this indictment lacks any credible evidence. Strikingly, it mentions the word ‘news’ more than 600 times. Plain and simple, this is journalism on trial.”

The case will continue, though no credible evidence of wrongdoing has yet been provided.  The next hearing is scheduled for September 25.

The hearing was held in a courtroom at Silivri Prison, where the journalists are being held.  Among the other current occupants of the prison: most of the human rights defenders detained this past July, including Amnesty International – Turkey’s director, Idil Eser.