Amnesty International USA Board Writes to Secretary of State 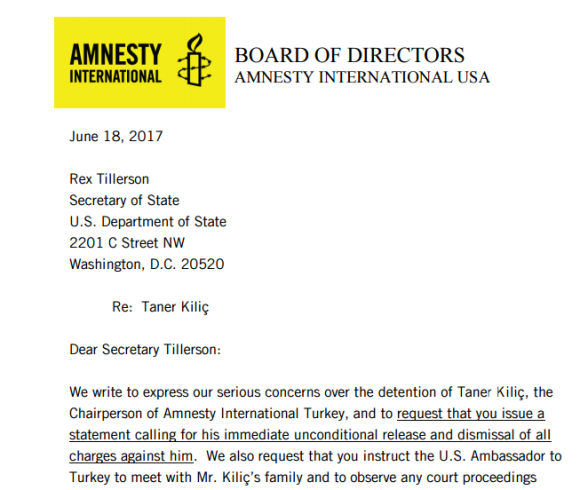 The letter notes the State Department’s strong press statement on Taner’s case, and calls on Mr. Tillerson to issue his own statement “calling for his immediate unconditional release and the dismissal of all charges against him. ”  The letter also requests that Mr. Tillerson  instruct the U.S. Ambassador to Turkey to meet with Mr. Kiliç’s family and to observe any court proceedings involving his case”

As the letter highlights, Taner’s case is part of a larger tragedy in Turkey.  His detention “takes place in the context of an escalating crackdown on human rights by Turkish authorities following a failed coup attempt in 2016.”

This crackdown has been marked by “the arbitrary detention of thousands of people with no involvement in the coup attempt including hundreds of lawyers, journalists, and media workers.”

What you can do