This week, Amnesty International issued a new report on the “professional annihilation” of civil servants who have been summarily dismissed in Turkey’s purge.

The report, No end in sight: Purged public sector workers denied a future in Turkey finds that tens of thousands of people including doctors, police officers, teachers, academics and soldiers, branded as ‘terrorists’ and banned from public service, are now struggling to make ends meet.

“The shockwaves of Turkey’s post-coup attempt crackdown continue to devastate the lives of a vast number of people who have not only lost their jobs but have had their professional and families lives shattered,” Andrew Gardner, Amnesty International’s researcher on Turkey.

“Tainted as ‘terrorists’ and stripped of their livelihoods, a large swathe of people in Turkey are no longer able to continue in their careers and have had alternative employment opportunities blocked.”

The report, based on 61 interviews conducted in Ankara, Diyarbakır and Istanbul finds that, once in secure public sector jobs, workers are facing a dire situation with no means of redress. Interviewees all described how in the absence of other means of support including social security benefits, they were forced to live off their savings, rely on support from friends or family, take jobs in the irregular economy, or scrape by on small handouts from their trade unions.

Many dismissed workers are forbidden to work privately in professions regulated by the state, such as law and teaching. Similarly, sacked police and military officials are banned by decree from finding similar work in the private sector. The few professionals who are permitted to continue their careers in the private sector such as health professionals, are struggling to find jobs, especially equivalent work commensurate with their previous salaries.

Dismissed public sector workers have had their passports cancelled removing the possibility of working overseas and thereby severely restricting their job opportunities still further. “They don’t allow us to leave the country, they don’t allow us to work…what do they want me to do?” one woman who was dismissed from her top civil service job in the President’s office asked Amnesty International. 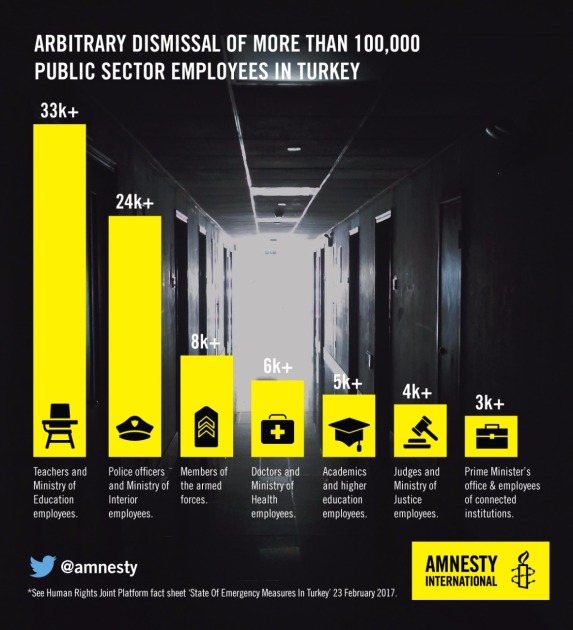 Even if some of the dismissals – such as those of soldiers who took part in the coup attempt – can be justified, the failure of authorities to set out clear criteria for the dismissals or provide any individualized evidence of wrongdoing blows a hole in their claim that all the dismissals are necessary to counter terrorism. Instead, evidence suggests widespread abusive and discriminatory motives behind the purge. One former local government employee told Amnesty International: “If anyone wants to erase you from the institution, they just give your name as a Gülenist”.

The very public nature of the dismissals has made things difficult for those dismissed. “I was regarded as a hero by society. Now I’m seen as a terrorist and a traitor,”a former soldier who was stationed the other side of the country from where the coup attempt took place, told Amnesty International. An academic who was dismissed in August 2016 told Amnesty International: “My son didn’t want to go to school, the other children were picking on him, saying that his mother was a terrorist and a traitor.”

None of the people interviewed by Amnesty International have been provided with any explanation for their dismissal beyond the generalized allegation of links to terrorist groups. Yet in spite of the clear arbitrariness of the dismissal decisions, there is no effective appeal procedure for public sector workers against their expulsions. A commission proposed in January to assess the cases lacks both the independence and the capacity to make it effective. It is yet to start operating.

A small number of dismissed public sector workers have publicly protested their dismissal, and faced police harassment, or even detention and ill-treatment. Nuriye Gülmen, an academic, and Semih Özakça, a teacher, are on the 75th day of a hunger strike in protest at their dismissals.

“Cutting 100,000 people off from access to work is akin to  on a massive scale and is clearly part of the wider political purge against real or perceived political opponents,” said Andrew Gardner.

“The authorities must end these arbitrary dismissals immediately, and reinstate all those who are found not to be guilty of wrongdoing. Those who have been dismissed should be given access to a swift and effective appeal procedure in order that they can clear their names, be compensated and return to their careers.”