Another shocking attack on freedom of expression in Turkey 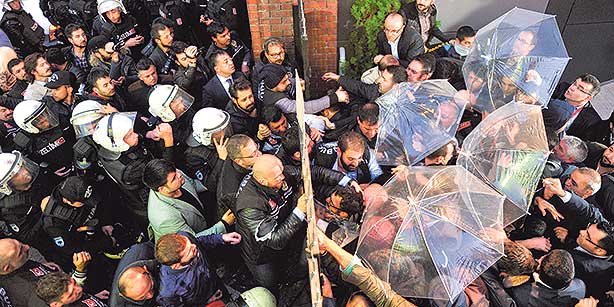 Riot police break the main entrance of the İpek Media Group headquarters in İstanbul during the raid on Wednesday. (Photo: Today’s Zaman)

Today’s raids on Turkish media outlets are “yet another shocking attack on journalists and freedom of expression in Turkey, and come just four days before a crucial parliamentary election on Sunday,” according to Amnesty International in a statement released today.

The statement highlights the political nature of today’s actions, noting that “the Koza İpek group contains outlets that span television, print and online media, including Millet and Bugün newspapers and the Bugün and Kanaltürk news channels. All are fierce critics of the Justice and Development Party (AK Parti) government.”

Amnesty International: The Koza İpek raids are a shocking attack on journalists and freedom of expression in Turkey pic.twitter.com/qemzHSeuso

Amnesty went on to say that “today’s actions come in an environment in which journalists, human rights defenders, activists and ordinary citizens are routinely prosecuted and brought to trial for peacefully expressing their legitimate opinions.”

This afternoon, broadcasts by the Kanaltürk and Bugün news channels were cut after government administrators entered the building with policemen who forced their way in. Tarık Toros, editor-in-chief of the Kanaltürk channel, was removed from his duties and taken from the building in handcuffs by police.

On Monday, an Ankara court granted the prosecutor’s request to send in government administrators to replace the senior management of the Koza İpek group. The order was justified on the grounds of “strong suspicion of [the group] committing crimes”. The move follows a September raid on the headquarters of the Koza İpek group as part of an ongoing investigation into the financing of terrorism in the context of alleged links between the group and what the government has designated a “Fetullah Gülen terrorist organization”…

Earlier this week, prosecutors in Istanbul submitted an indictment to the court accusing 122 people, including Fethullah Gülen, of charges including “leading or founding an armed terrorist organisation”.

“The recent attacks against the Koza İpek group,” ,” said Amnesty, “provide yet another example of the authorities’ efforts to silence dissent by harassing and intimidating government critics.”