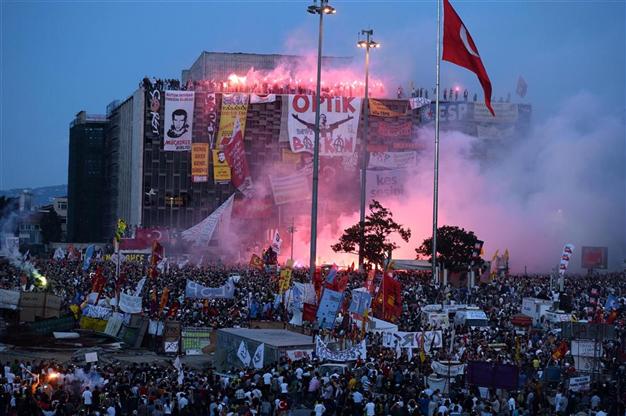 Yesterday, saw two positive court decisions in Turkey.   But the sad fact is that the judges made the right decision in two cases that should have never been brought to court, that represent a terrifying politicization of the criminal justice system, and that represent a sustained attack on freedom of expression.  The sad fact is that this sort of prosecution continues unabated in Turkey.  Yesterday’s decisions, were positive signs of judicial resistance.  But the ugly pattern continues.

The appalling trial of members of Taksim Solidarity for their activities during the Gezi Protests  ended with the acquittal of all accused.   Andrew Gardner, Amnesty International’s Turkey researcher, speaking last year, described the prosecution as “a vindictive, politically motivated show trial without a shred of evidence of actual crimes.  He added that the “prosecution [concocted] a case simply to send a strong message to the rest of Turkey that the authorities will ruthlessly pursue anyone who dissents and organizes protests against government policies.”  The court made the right decision.  But this was a trial that never should have happened.

Another positive court decision came in the case of Umut Kilic, who has been held in pre-trial detention under charges of defamation against Turkey’s President Tayyip Erdogan.  Yesterday, a court ordered that Kilic be freed pending his trial.  Again, this is a positive development.  But human rights groups, including both Amnesty International and Human Rights Watch have noted that defamation cases such as this represent an attack on Turkish citizens basic rights to freedom of expression.

For its part, Amnesty has noted that the use of defamation cases as a means of silencing critics and to its opposition to laws criminalizing insults or disrespect to “flags and other [national] symbols:

Article 125 is frequently used to prosecute criticism of the actions of politicians and other public officials, despite authoritative interpretations of international freedom of expression standards that require public officials to withstand greater public criticism than private citizens. Journalists exposing human rights abuses and commenting critically on the actions of public officials are particularly at risk of prosecution.  Prosecutors typically initiate investigations following complaints by public officials, who later bring civil claims for damages in addition to seeking a criminal conviction. The Prime Minister in particular has brought a number of cases under this provision.

Late last year, I described “the pernicious logic” of such prosecutions:

What is clear from this vast array of prosecutions, largely petty, and often ending in either acquittal or suspended sentence is that they are meant to stifle dissent in a broad manner.  Anyone – whether a journalist, a protester, or simply a citizen talking politics at a barber shop – can be targeted for a long and costly prosecution.  The very arbitrariness of the prosecutions makes them more pernicious and more damaging to freedom of expression.

Yesterday’s court decisions should be applauded.  But the ugly landscape of of state prosecutions remains strong.