From Maraş to Roboski: Remembering and Forgetting in Turkey 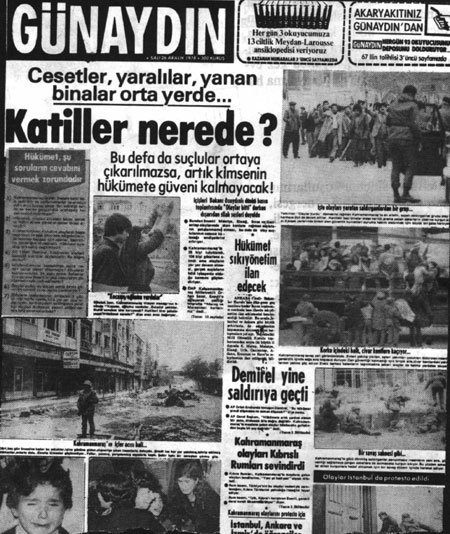 In my blog last Friday, I briefly noted the efforts of local authorities in Turkey to suppress commemorations of the brutal Maraş massacre and noted that this action, apparently in contravention of basic norms regarding freedom of expression and assembly, was part of a larger strategy of selective historical memory in Turkey:

The AKP, which has been remarkably willing to open up discussion of some horrific chapters in Turkey’s history (most notably Dersim), have nonetheless, been extremely selective (and instrumentalist) in their choices.  Crimes such as those Maraş, in 1978, or in Sivas, in 1993, which might implicate their own devout Sunni base, are much less likely to be seriously addressed.  Worse, the government continues to actively stifle debate, investigation, and remembrance of many of these crimes.

It is in this light that I would like to remind readers that the December 28th marks another black mark in Turkish history, the anniversary of the Roboski (or Uludere) bombing, in 2011. In January, 2012, a little over a week after the events, I wrote:

On the night of December 28, 2011, two Turkish F-16s attacked a group of civilians crossing into Turkey from Iraq, killing thirty-five, many of whom were children (one only twelve years old).  The Turkish government has described it as an unfortunate accident and promised an investigation, but many believe the attack was intentional, especially given that this was a well-known smuggling route for Kurds along the Turkish-Iraqi border.   It was, according to the head of the Turkish Human Rights Association, Öztürk Türkdoğan, quite simply, “a massacre… an extrajudicial execution.”

Clearly, without a transparent inquiry, the truth cannot be known.

A year later, at the one-year anniversary of the bombing, Amnesty voiced its dismay at the failure of the Turkish government to fully and impartially investigate these deaths.  Amnesty found evidence of a sloppy investigation that lacked even rudimentary transparency.   Amnesty’s 2013 Annual Report noted the same (p. 276).  Clearly, in a land of selective historical memory, the Turkish government expects that these deaths too will slip into the realm of forgotten tragedies.