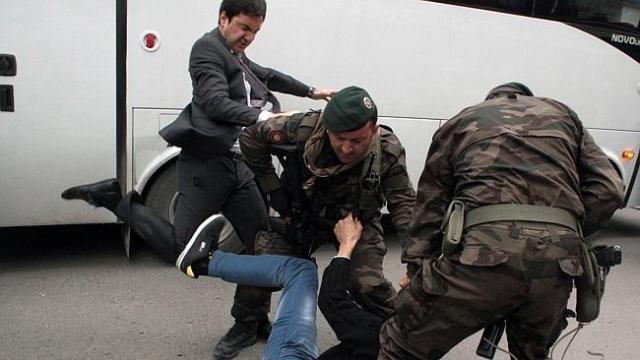 If the “woman in the red dress” has become the central image of the Gezi protests, it seems likely that images of Yusuf Yerkel, an aide to Turkish Prime Minister Tayyip Erdogan, brutally kicking a demonstrator will become one of the key symbols of the Soma mining disaster and the government’s subsequent response.

That this is true is, in itself, disturbing, in that it draws our attention away from the monstrous loss of life at the mines as well as important questions about the culpability of both the mine’s owners and the government officials responsible for its oversight.

Turkey’s record on industrial safety is weak and mining deaths have spiked in Turkey under the AKP, despite advances in technology.  In the meantime, the funerals are underway and more than a dozen miners have not yet been recovered.  Hopes for their survival are slim.

Yet, the image of the elegantly clad Yerkel brutally kicking a prone victim seems particularly important.  In the photo of the “woman in a red dress,” a police officer used pepper spray on his victim despite the fact that she clearly represented no threat.  In the photos of Yerkel, his victim is prone and held down by two security personnel.  In both cases, representatives of the state employ casual violence against citizens with no apparent concern for repercussions.  Indeed, Yerkel has stated that he is “saddened” that he lost his temper but, apparently, authorities have not initiated an investigation into either his or the security personnel’s behaviour.

The government appears to have fallen back on its old defensive posture.  The accident, Erdogan claims, is just a natural outcome of a dangerous industry.  As reported in the press,

“I went back in British history. Some 204 people died there after a mine collapsed in 1838. In 1866, 361 miners died in Britain. In an explosion in 1894, 290 people died there,” Erdoğan said on a visit to the grieving town of Soma, while choosing not to elaborate on how accidents in 19th-century Britain might be applicable to Soma’s unfolding disaster.

But of course, this is not 1907 and the Turkish mining industry stands out as one of the most dangerous in the world.

In the meantime, Turkish authorities continue their crackdown on dissent.  Protests in Istanbul, Ankara, and Izmir have all been met with the usual tools of police repression: tear gas, water cannon, plastic bullets.

Shockingly, police repression of peaceful demonstrations has even extended to the region around Soma, where the families, friends, and neighbors of those killed or missing in the mines have themselves been subject to police violence today.  Watch CNN’s report here.

As one friend said, “[I] was going to say ‘it’s unbelievable that a community hit by tragedy [would] be attacked by police.’  Alas it isn’t unbelievable in Turkey.”