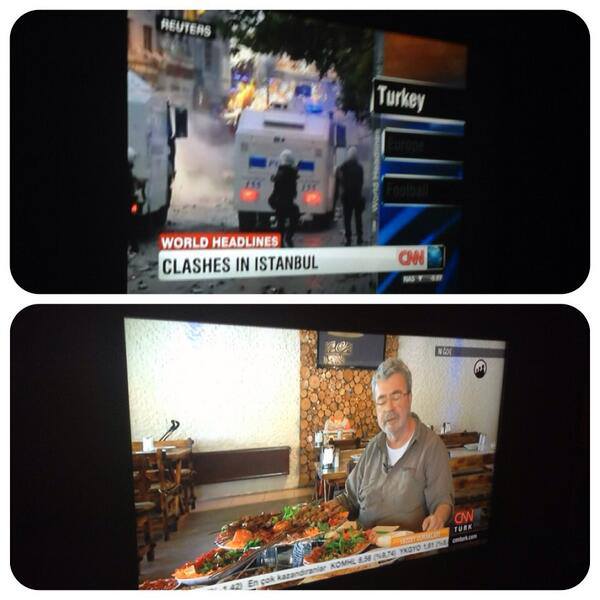 A comparison making the rounds on facebook: simultaneous broadcasts: a cooking show on CNN Turk and graphic images from Taksim square on CNN International

Prime Minister Tayyip Erdogan has found a lot of people to blame for the shocking (and on-going) violence that has shaken Turkey this past week (he and his government not notable amongst them):  the parliamentary opposition, “extremists,” “a few marauders,” “illegal groups,” and, most recently, “social media.”

According to a BBC report, Erdogan called “Twitter was a ‘curse’ and an ‘extreme version of lying.'” “I think social media as a whole is a pain in the side of society,” Erdogan said.  While it is certainly true that a there has been a lot of misinformation spread through social media this past few days, I think I am safe in saying that twitter was not the cause of the outrageous and indiscriminate force used by Turkish police against peaceful protesters.

Indeed, for all the flaws of social media in disseminating accurate information, the utter failure of most Turkish media to effectively cover the historic events in Turkey is worth recognizing.  The Turkish government has failed badly in this regard, particularly in its unwillingness to disclose accurate casualty figures.

Not all of this “social media” is high tech either. Perhaps one of the most touching  is the impromptu clattering of pots and pans which shook much of Istanbul periodically over the past few days.

The failure of Turkish media this past few days is, of course, the result not only of corporate cowardice, but of years of pressure on journalists and media organizations by the Turkish government.

As Yavuz Baydar wrote after a similar crackdown on protesters at the May Day celebrations last month:

Regulation of broadcast media is stiffly controlled by the government. The “moral majority” is increasing its pressure to censor content in both the conventional and digital domains…Concentrated media ownership, as well as the large business activities of media proprietors in industries other than media, make the sector totally vulnerable to unholy alliances with the political elites, and keep journalism from its watchdog role. Coverage of any corruption, or power abuse, is almost non-existent, blocked by greedy and power-sensitive proprietors.

The long-standing war on independent journalism in Turkey has created a context where Turkish television has barely covered the historic events shaking major Turkish televisions.  Social media like twitter and facebook have leapt into this gap, reporting and helping support victims of police violence.

For steps you can take to help combat the excessive use of force in Turkey as well as the suppression of free speech, click here.